Definition: A Distributed-Denial-of-Service attack is one of the most harmful attacks that can be launched against an information infrastructure. The anatomy of a DDoS assault begins with the enlistment of a large number of computers (i.e. Zombies, bot armies, etc.) that have been co-opted by crackers or organized crime. Hundreds of thousands of computers, for example, can be directed against a particular computer network target. The intended target is simply overwhelmed and unable to respond to legitimate requests for service. The network or information resource is made unavailable by the sheer force of traffic (numbers). 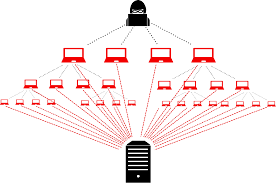 Its Relevance: Network infrastructure owners must adopt information security policies that are resistant to attempts to harm systems using attack vectors like the one described above. Network architecture and intrusion detection systems would be part of an effective solution. Otherwise, the effects of such an attack can be devastating.

How to Defend Against a DDOS Attack