Definition: Popup blockers are a class of software that is capable of keeping unwanted information (usually an ad or other form of unwanted solicitation) from appearing during a browser session. Some browsers allow for that level of functionality. Prolific images and unwanted ads can be irritating and ultimately harmful to the information infrastructure. One of the major problems with images that display without being requested is the idea that the designer could be a cracker and design a picture that executes malicious software when the user clicks on “Close”. Interaction with the ad usually triggers the installation of spyware. 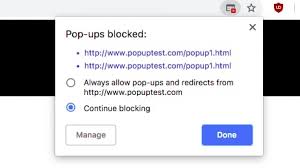 Its Relevance: Unsolicited ads at the very least are annoying and consume resources. They can also be used to entice a response from the user that initiates spyware being installed.